a comprehensive book on Indian spiders 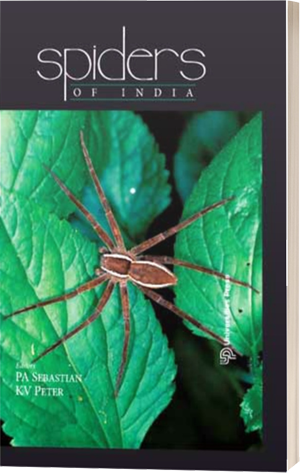 Spiders of India is the only modern book available on the subject, and will prove an invaluable resource for professionals, students, naturalists, and researchers in zoology, entomology, ecology and physiology. This book is aimed to popularise the study of spiders in India, to correct many false impressions about these animals, to create an awareness and interest about their study and more importantly, to provide an in-depth understanding of spiders of India with detailed information on selected species, based on available published literature and from our own personal observations. This book is not intended to be a complete account of the spider fauna of India, but attempts to describe the most common and widely distributed species and those species which are commonly encountered in the field. The book also contains, importantly, a decisive and updated checklist of the 1,520 spiders which have been described from India. It is richly illustrated with line drawings and diagrams, and more than 150 colour photographs, many documented for the first time.

For easy comprehension, the book has been divided into two parts, each part being subdivided into chapters. The first part of the book looks at the morphology, anatomy, natural history, bioecology and as well as systematics and evolution of spiders. The second part deals with the spiders of India with descriptions of all the families described so far from India, as well as descriptions of selected genera and species. Attempts have also been made to present colour photographs of as many species as possible. Most of the detailed descriptions and photographs are of those spiders occurring in the different ecosystems in South India, especially the state of Kerala, which have been more easily accessible to the authors of this book. The book also contains a glossary and updated checklist of Indian spiders.

Dr P. A. Sebastian took his doctoral degree in arachnology from Bhavnagar University, Gujarat. Since then, he has been actively engaged in research on various aspects of spiders such as taxonomy, ecology, diversity, biological control potential, toxicology, synanthropic spiders, spider silk biotechnology, spider venom chemistry, etc. In 1998, while working as a Reader of Zoology at Sacred Heart College in Kochi, he founded the arachnology division, India's oldest and most developed centre for studying spiders. In the Division of Arachnology, he has taken the initiative to form a research group dedicated solely to spider research. In his career, he published more than 60 papers on arachnology and supervised nine PhD candidates.

Dr K. V. Peter is a horticulturist, a plant breeder, a university teacher, and an acknowledged research manager. He is a Fellow of the National Academy of Agricultural Sciences, New Delhi, and the National Academy of Sciences Allahabad. He is the Director of World Noni Research Foundation, Chennai and the Former Vice-Chancellor, Kerala Agricultural University (KAU), Director, Indian Institute of Spices Research, Calicut, Director of Research KAU and Professor of Horticulture from 1979. A postgraduate from G.B. Pant University of Agriculture and Technology, Pantnagar (1969-1975), he is associated with the development of biotic stress-resistant varieties in Chilli (Pant-C1, Pant-C2), tomato (Sakthi) and brinjal (Surya), which are grown throughout the country.